The A83 is the gateway to Argyll, a vital road running from Campbeltown to Tarbet via the ferry port at Kennacraig.

A comprehensive route study, conducted by Jacobs, concluded that work needs to be done across the length of the road. Transport Scotland has developed a programme of improvement works that target the issues identified by the route study.

A major part of the project involves landslide prevention at Rest and Be Thankful, the highest point of the road. The rest of the work will involve speed control measures, road improvements and pedestrianisation.

The A83 improvements programme may vary throughout the year due to unforeseen circumstances for example weather or emergency events, but we will update the programme to reflect any changes as they occur.

It is difficult to predict what our budget priorities may be beyond this financial year, therefore the programme beyond 2017/18 is indicative and subject to change.

This page features information on each scheme, including up to date progress and additional details.

Below are the minutes and presentations from taskforce meetings since its inception.

The A83 between Campbeltown and Kennacraig is a 51km stretch of single carriageway which carries about 2500 vehicles a day.

In August 2013, Scotland's First Minister announced that the A83 between Campbeltown and Kennacraig would be trunked. Transport officials are taking forward the formal trunking process and have opened discussions with Argyll and Bute Council.

Many sections along the A83 are high-risk areas for potential landslides. Alongside significant work at Rest and Be Thankful, the Route Study identified three key areas for landslide protection work. In Autumn 2013 Transport Scotland instructed BEAR Scotland to produce detailed report into each of the following known landslide areas. 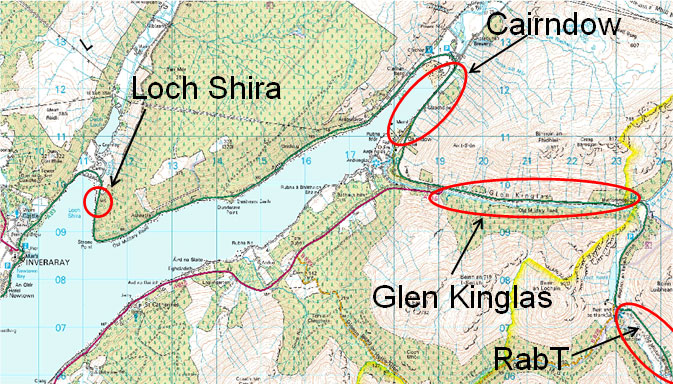 In the mid-70s, a major landslide severely impacted the trunk road passing by Loch Shira. Since then, the slopes above the road on the eastern shore have been a source of concern.

In 1994, contracts were awarded to cut back the slope, install cut-off drains and the rockfill blanket. Ongoing slope movements, however, have led to signs of distress in these installations. The rock blanket and cut-off drains are now at the end of their useable life.

A number of options to replace them have been investigated. The preferred options are:

The Glen Kinglas study area is located between Butterbridge in the east and the settlement of Cairndow in the west. It is approximately 5.5km long and contains 32 channels that flow perpendicular to the Trunk Road. Typically events in Glen Kinglas are less dramatic that those experienced at the Rest and Be Thankful.

A number of potential risk reduction methods were considered during the assessment process, including:

The preferred option is a combination of linear catch ditches and bunds. This could take the form of a an earthworks ditch and associated bund, which will be in t he region of 1.5m to 2.5m high.

The Cairndow study area is situated immediately north of the hamlet of Cairndow. A comprehensive desk study and site walkover survey were conducted to identify potential hazards and assess factors that influence the likelihood and severity of a potential landslide. These factors include, but are not limited to:

Additional elements contributing to road user exposure were also considered, including parking spaces and the suitability of existing infrastructure.

A review of the site observation and desk study information determined the primary hazard to be from shallow landslide failures and channelised debris flows, the likelihood and severity of which vary throughout the route.

The study of the A83 concluded that the Cairndow study area is the lowest risk of the three highlighted landslide areas.

The A83 improvements project consists of many localised projects along the length of the road, according to issues identified in the route study.

Strone Point is a tight corner on the A83 outside Inveraray. £1.3 million of the A83 budget will go towards refining this section of the road.

The scheme will involve:

These plans have been designed to stop any encroachment on the Loch Fyne SSSI, moving the road inwards instead of onto the loch.

The route study recommended improving the road around Dunderave, covering 5km of the A83 between Ardgenavan and Dunderave castle. The works will include:

This scheme is being progressed in three phases so it can begin sooner. Phase 1 will improve the condition of the carriageway and, where possible, will also aim to incorporate localised road widening.

One of the Route Study's recommendations involved widening the narrow section of Barmore Road in Tarbert.

Schemes in residential areas, however, come with several extra considerations. Alongside the widening project, the study also anticipated improvements to the footways, road markings and traffic signage. We have completed a survey of the area and preliminary design to give us the information we need to complete a feasibility assessment of this location. Our Operating Company, Bear Scotland are in the process of finalising the feasibility report on options at this location.

We have progressed a review of the layby provision on the A83 Trunk Road to investigate and review the condition of all existing laybys on the route. Investigations are currently ongoing and as we progress with this study, we will update our programme of works to reflect the outcomes of the study.

The A83 Route Study highlighted possible pedestrian measures at the following points along the road:

These areas were highlighted after consulting local communities, who drew attention to areas that had been ignored in previous studies. We have commissioned Jacobs to undertake further studies in these areas.

Assessment of pedestrian facilities, and particularly pedestrian crossings, requires consideration of a range of elements to establish its potential benefits. We consider each location based on the site and its constraints, but the types of things which could be covered include:

The A83 Route Study was undertaken to identify and appraise potential options to minimise the effects of road closures with the objectives of:

The final A83 Route Study report and associated consultation feedback paper were published on 22 February 2013.

Part A examines the landslide issues at the Rest and Be Thankful. It identifies and appraises potential options to minimise the effects of road closures.

Part B examines a range of trunk road issues along the length of the A83 Trunk Road between Tarbet and Kennacraig  such as investigating the feasibility of removing traffic pinch points and improve pedestrian safety in villages.

This joint TRL and Transport Scotland report examines the merits of a number of ecological and related landslide mitigation options for the southwest facing slopes of Beinn Luibhead in Glen Coe above the A83 trunk road. The use of explosives and issues related to livestock and vegetation planting are reviewed.