This section examines how the proposed replacement of the Ba Bridge on the A82 Trunk Road in Rannoch Moor will affect the geodiversity (geology, soils and geomorphological features and processes) within the vicinity of the scheme footprint. Bridge schemes have the potential to impact upon the geology, geomorphology and soils of an area through direct and indirect impacts, loss or sterilisation of mineral deposits or soil resources, change of geomorphological process rates and alteration to geomorphological landforms, and disturbance of contaminated land or surcharging of ground that may accelerate erosion and subsidence.

Bridge replacements can affect geological resources through excavation or masking exposures of rocks or substrate, representing a serious impact if these features are not reproduced elsewhere. Similarly, removal or modification of geomorphological features can affect their scientific value or the local landscape resource. Development can also affect geological resources in a positive way, for example, new rock and facies exposures can be revealed by cuttings, which may be valuable for scientific research.

This section has been prepared in general accordance with the principles and techniques outlined in ‘The Design Manual for Roads and Bridges (DMRB), Volume 11 (Environmental Assessment), Section 3 Environmental Assessment Techniques, Part 11 – Geology and Soils’. The aims of this section are to: (1) establish the baseline geodiversity characteristics within the study area; (2) assess the predicted impacts on geodiversity; and (3) detail any mitigation measures taken to counter any possible negative effects on the characteristics of the geodiversity within the study area.

The study area for the assessment extends approximately a 100 m radius of the proposed scheme. Assessment was based on desk study of relevant plans, maps and documents (BGS, Scotland Sheet 54W, 1948; Babtie, 2004), consultation and a walk-over survey of the scheme extents and wider environment by an experienced geomorphologist.

Consultations were undertaken with a number of statutory and non-statutory Scottish bodies holding records pertinent to the assessment of geological impacts. These include:

The Solid geology map (Sheet 54W) indicates that Ba Bridge is located in an area dominated by granite with the exception of flaggy psammitic granulite to the south west. The granite belongs to the Argyll Granites. The map indicates the presence of a major fault running southwest – northeast and aligned with the Laidon and Ericht lochs. Jacobs Babtie (2004) indicates that the site is generally underlain by very strong, grey, crystalline slightly weathered to fresh granite. Rock-head level was encountered at 290.25 m AOD to the north of the bridge, and at 290.07 m AOD to the south, approximately 2 m below the present surface. There are few bedrock exposures within Rannoch Moor and none around Ba Bridge.

The A82 runs approximately northwest to southeast on embankment up to 3 m high (Figure 6.1), the slopes of which are covered by grass, shrubs and heather. The surrounding area is relatively flat, consisting of heather covered blanket peat (higher ground) and blanket bog (lower ground). According to the BGS Drift Geology Map (Sheet 54W), the study area is underlain by morainic drift deposits, which are extensive and well developed. They comprise very dense, organic, clayey, gravely, sand, and cobbles. 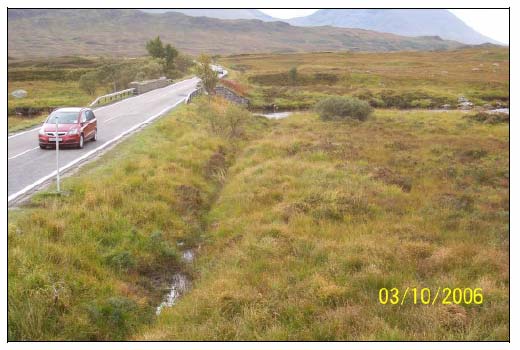 The whole of the terrestrial part of the study area is underlain by peat of varying types. Rannoch Moor contains the most extensive complex of western blanket and soliginous/valley mire in Britain. Peat is an important carbon store, and so Rannoch Moor is one of the largest carbon stores of its type in the UK.

Rannoch Moor is important geomorphologically because it is believed to be, or be close to, the centre of ice-sheet growth in the UK during the last maximum glaciation and Younger Dryas re-advance. Therefore, it exhibits important palaeo-ecological indicators of climate change since deglaciation and glacial features associated with the deglaciation, such as moraines, drumlins and eskers (Figure 6.2). The area around Ba Bridge, which is only a very small area within Rannoch Moor, is characterised by large hummocky moraines or drumlins with associated hollows (Figure 6.3). The bridge sits in a flat, low area of ground between two hummocky moraines to the north and south that bound the area of proposed construction. Active geomorphology is confined to the River Ba and Loch Ba. Fluvial geomorphology is discussed further in Chapter 7 and Appendix B.

Figure 6.2 The vast expanse of Rannoch Moor blanketed with deglaciation features such as moraines and drumlins. 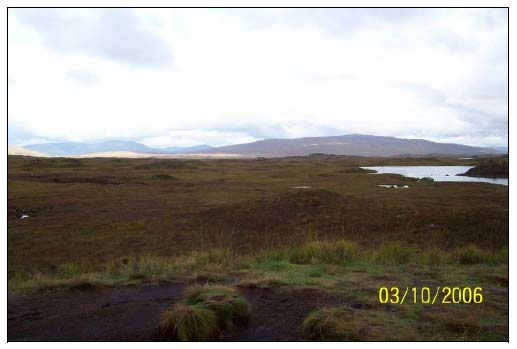 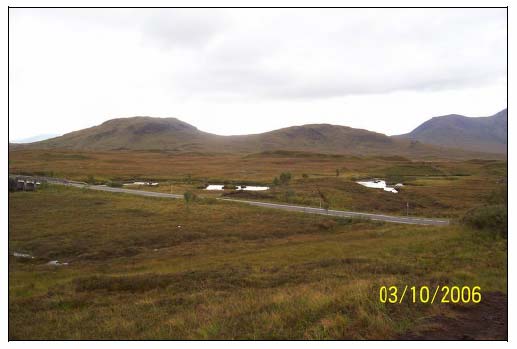 Ba Bridge is located within the Rannoch Moor SSSI and the Ben Nevis and Glen Coe National Scenic Area (Figure 3, Appendix A). Rannoch Moor SSSI is of international nature conservation importance. It contains the most extensive complex of western blanket and soliginous/valley mire in Britain and is of particular importance on account of its range of northern mire types. Ba Bridge spans the River Ba, which is part of the Rannoch Moor Special Area of Conservation (SAC), designated for nine qualifying interests, the most pertinent for this chapter being blanket bog, depressions on peat substrates and acid peat-stained lochs and ponds. There are no designated sites of geological interest identified in the area of the proposals.

Historical Ordnance Survey maps available for the area (first and second editions from 1906 and 1968) indicate that land use has remained unchanged. No history of mineral extraction within the area was suggested by the maps.

Selected chemical tests (pH and sulphate) were carried out during site investigations (Babtie, 2004) indicating that the drift deposits have a pH of 7.4 to 8.9 and a sulphate content of 0.02 to 0.04 g/l. No contamination was evident, which is consistent with the land use history.

Historical Ordnance Survey maps indicate that surface water levels in Lochan na Stainge and Loch Ba fluctuated between 290 and 305 m AOD, suggesting that those surface water levels are likely to be a reflection of groundwater level and precipitation amounts. The large range of values could possibly represent error associated with historical surveying. Groundwater will, however, vary through time due to climatic conditions. The maps also indicate that the Ba Bridge area is traditionally very wet due to a high water table maintained by high levels of precipitation and local geology and topography. The bedrock aquifers in this area are characterised by fracture flow with very low productivity.

For the purpose of this assessment, the following criteria have been used to assess the value or sensitivity of the geological, geomorphological and soil attributes within the study area (Table 6.1). Specific criteria for the assessment of contaminated land, mineral extraction and hydrogeology are undefined because they are not believed to be of consideration for Ba Bridge. The sensitivity criteria are considered along with the assessment of impact magnitude, defined in Table 6.2 to derive the significance of each impact as illustrated in Table 6.3.

The magnitude of impact (Table 6.2) was assessed independently of the site value and assigned to one of the following categories based on professional judgement.

The assessment of the impact, either beneficial or adverse, is a function of the value of the site and the magnitude of impact (Table 6.3). The assessment classification has four categories; Major, Moderate, Slight and Negligible. For the purposes of this assessment, impacts assessed as being moderately negative or greater, and any positive impacts are considered to be significant in terms of the Environmental Impact Assessment (Scotland) Regulations 1999.

The predicted impacts have been assessed in relation to drift geology, geomorphology and pedology. Further impacts associated with the construction phase of the scheme are considered fully in Chapter 10. There will be no significant impact to the hydro-geological resource (lithology only) because there will be no significant change in the levels of associated pollution from the scheme. Groundwater within the organic layer, which in this location is entirely peat, is important as it maintains peat structure. The scale of the works and the site will mean that ground contamination is unlikely. Mineral extraction is not an issue at the site.

There will be a small volume of drift deposit excavated for the works in order to accommodate the wider bridge structure, the temporary bridge structure and the new drainage ditch on the SE side of the bridge. The two hummocky moraines (or drumlins) may be cut exposing the structure of the minerogenic substrate from the moraines which could be of benefit for scientific research. The amount of material excavated from the moraines and areas closer to the river will be insignificant when compared to the extent of deposits within Rannoch Moor. No other geomorphological features will be affected by the scheme, therefore the impact on the local geomorphology and drift geology can be assessed as slight.

There will be a small volume (estimated at 10 m3) of peat excavated for the widening of the embankments, construction of the temporary bridge and excavation of the new drainage ditch. Peat is a medium value receptor and is primarily important due to the habitats which it supports. The small amount of peat which will be impacted as a result of the scheme is considered to be minor and therefore the overall impacts on the peat resource are assessed to be slight. The Rannoch Moor SSSI is cited for its important mire habitats and there are no specific geological features forming part of the designation. There will be no permanent loss of any habitats that are notified SSSI features during operation. More detail on the impacts on the associated habitats are dealt with in Chapter 8 (Ecology and Nature Conservation). Overall, there is predicted to be a slight impact on soils as a result of the scheme.

Permanent loss of habitat will be restricted to small areas immediately adjacent to the existing carriageway. However, additional damage to adjacent habitats should be minimised during construction by adopting best practice construction procedures that limit movements of heavy machinery and restrict access to adjacent areas.

In order to avoid significant long-term adverse impacts on the surrounding semi-natural habitat, peatland turf removal, storage and replacement (translocation) strategies are advised and will include the following steps:

Following the mitigation measures detailed, residual impacts on geological and soil resources of the study area are assessed as negligible. No cumulative impacts upon geology and soils have been identified.