2.1 The Airdrie to Bathgate rail link improvement project originated from the Central Scotland Transport Corridor Study (CSTCS) which was carried out on behalf of the Scottish Executive from 2001 until 2003 to assess solutions for easing transport problems in central Scotland. In January 2003, the Scottish Ministers decided to accept the recommendations of the CSTCS to introduce a 15 minute frequency rail service between Glasgow and Edinburgh, via Airdrie and Bathgate.

2.2 As a result, the Airdrie to Bathgate Rail Link Improvement Project was created and became operational as a reduced service in December 2010, with full service beginning to operate by May 2011, at a cost of £300 million. 2012 was the first calendar year of full services.

2.3 The service was designed to deliver a double-track electrified railway with a nominal minimum design speed of 80mph, although where reasonably practical 90mph is the target speed. The line was intended to be capable of supporting a minimum operation of four passenger trains per hour in each direction using modern electric multiple unit rolling stock.

2.5 New stations were built at Caldercruix, Blackridge and Armadale. The existing stations at Airdrie, Livingston North and Uphall were developed to provide additional platforms and improved car parking.

2.6 The evaluation of rail projects in the UK has typically had less focus than ex ante appraisal and also when compared to other public policy areas. Transport Scotland is, however, developing rail evaluation guidance which is being tested and refined through three pilot evaluations.

2.8 The Stage 1 evaluation involves a 'light touch' review, the purpose of which is to provide an initial indication of the project's impact and confirm how the project is progressing towards achieving its objectives. The aim is that a more in-depth, Stage 2 evaluation will be undertaken five years after opening when enough time has passed for impacts relating to these objectives to work through.

2.9 The Stage 2 evaluation is conducted once the project has been in existence for a sufficient period to enable a comprehensive examination to be undertaken of actual performance against identified targets. If undertaken too soon, final impacts may not have had time to "work through", but if undertaken too late, evaluation results may lose relevance. To ensure a balance between the two, it is considered that Stage 2 Outcome Evaluation should take place approximately three to five years after opening.

2.10 The process evaluation of projects related to the Airdrie to Bathgate rail link worked in a different way to that associated with other work. It had been undertaken before this contract was commissioned and it was the responsibility of the contractors to pull the evidence together into a coherent entity, making sure that any main findings were pulled out.

2.11 The general location of the Airdrie to Bathgate improvements is shown in Figure 2.1. 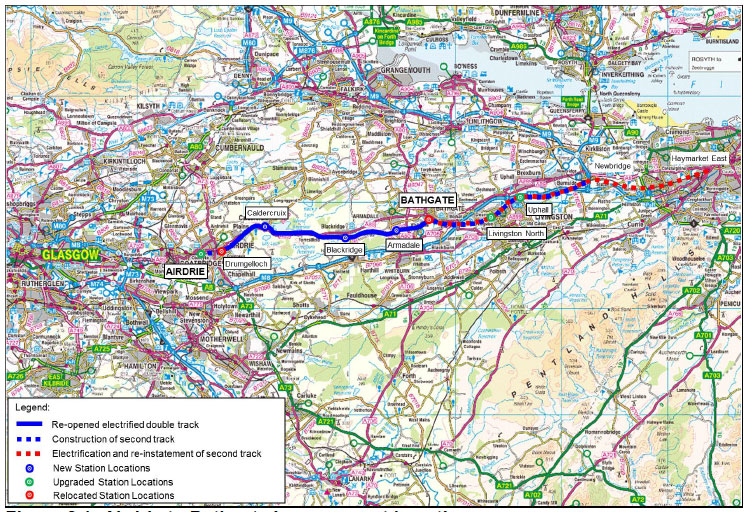 2.12 The objectives of the Airdrie to Bathgate rail link improvement were set as follows:

2.13 The evaluation undertaken by CH2M Hill included the following objectives:

2.14 The aim of the Airdrie-Bathgate Stage 1 Outcome Evaluation was to provide an early assessment of the extent to which the project is on track to reach its objectives, through the examination of relevant monitoring data.

2.15 A number of data sources was used to inform this evaluation. These included LENNON (Latest Earnings Networked Nationally Overnight) to inform revenue/pricing data, patronage and trip destinations by station figures; ScotRail Passenger Rail counts to provide the figures on the numbers of boarders as well as the Scottish Neighbourhood Statistics (SNS) to inform the economic activity data for the local authorities affected by the development of the line.

2.16 As LENNON data were only available from 2009/10 onwards, ORR (Office of Rail Regulation) Station Usage Data were also used to provide information on the years preceding the operation of the link.

2.17 Chapter 3 gives an overview of how the Airdrie to Bathgate service is operating. An initial indication of how the Airdrie to Bathgate rail link improvement is progressing towards achieving its objectives is provided in Chapter 4, based on the evidence available at the time of preparing the report. Chapter 5 presents comments on the draft rail evaluation guidance based on experience of using it to undertake the Stage 1 Outcome Evaluation.