This section is also available in pdf format (612k)

In the preceding chapters the various elements of the scheme have been discussed and comparisons have been made on a point by point basis. In order to make an overall assessment of the scheme options a total of ten different cable stayed bridge configurations are compared on the following issues:

(a) Basis of costs

The conceptual designs proposals have been developed to scheme design stage to allow assessment of different scheme options. Structural quantities were derived in order to make a comparison of the relative cost of the different options.

The relative cost is expressed as a proportion of the Multi-Modal Base Case which is the Three Corridor orthotropic deck with concrete approaches (with a relative cost of 100%).

The costs are for the Main Crossing from abutment to abutment exclusive of Intelligent Transport Systems (ITS). The relative costs do not include any variation in earthworks on St Margaret’s Hill which might be required to accommodate the increased carriageway separation associated with the Two Corridor Option, but this small cost is not a significant differentiator between the options. The Base Case cost excludes any transition structures for multi-modal lane transitions that would have been required beyond the abutments.

For each cable stay bridge option the cost is based on a concrete box girder approach bridge since this is equivalent to the Multi-Modal Base Case.

(b) Comparison between D2M schemes and Multi-Modal Base Case

The combined reductions due to design development and reduced functional requirements result in the estimated costs of the D2M schemes being between 73% -  76% of the Multi-Modal Base Case (as tabulated in the comparison table of Section 1.42.11).

However, the design developments mentioned above could potentially lead to an estimated 14 % reduction in the cost of the Multi-Modal Base Case if it were further developed in a similar manner.

Despite the significant differences between the ten different schemes, the variations in costs are relatively small with the difference between the most expensive and the cheapest scheme being only 5% (compared to each other, in comparison to the base case the difference is only 3%). A number of factors have been identified which account for the small cost variation:

As described in Section 1.33, a preliminary assessment has been made of the construction duration. Generally the duration is 60 to 62 months, but notably a significantly longer duration of 68 months is anticipated for the Diamond Tower due to the complexity of the construction of the tower and at the deck-tower interface.

It is expected that all of the options considered may achieve the aerodynamic stability criteria with respect to vortex shedding and divergent instability (torsional galloping / flutter). However, this must be confirmed by wind tunnel testing and there is a risk, particularly for the unvented ladder beam options, that stability will not be achieved.

As noted in Section 1.18, the different Functional Cross Section options are relatively scheme neutral with minor advantages to each option.

Some of the differentiators regarding operation and maintenance are:

Considering these points, the schemes were ranked according to their relative maintenance burden. The ranking is given in the comparison table of Section 1.42.11. Significant weighting was given to the issues related to access for inspection and repainting of external steelwork since this is believed to be the most important maintenance item and also represents a health & safety risk for maintenance staff.

The construction of any large cable stayed bridge is associated with health & safety risks which must be carefully managed. The most significant risks are primarily related to working at height and working in an exposed environment.

From a health and safety perspective, the open ladder girder decks present a number of significant additional hazards which will present themselves during the construction phase.

Due to the open nature of the structure, the contractor will be required to provide significant temporary works below the bridge in order to provide safe access to the working face and to minimise the risk of workers falling from height. Due to the height of the deck, relatively small objects could cause significant injury or damage if dropped. This will require close sheeting and support suitable for an exposed location.

Large numbers of bolts and heavy connector plates are used to form the connections. Making the connections will involve very significant manual handling, along with frequent exposure to noise and hand arm vibration. At this stage there seems to be limited opportunity to mechanise the task and mitigate the risks. Therefore the contractor may need to employ significant numbers of workers to carry out this work.

By contrast the box girder deck options reduce or eliminate a significant number of the hazards identified with the above.

The enclosed nature of the environment eliminates the risk of falling people or objects except at the leading edge of the construction process. It provides the opportunity for relatively safe access within the confines of the structure. Temporary works below the bridge deck may be limited to the leading edge and completion of the joint.

Welding of the external box seams is anticipated which does not entail the use of heavy connecting plates, nor the use of heavy bolts. Internal stiffeners may be bolted but the bolts and connecting plates will be smaller and lighter. They will be fixed within an enclosed environment with the greater potential for automation or mechanisation of the process. Noise will remain a problem but manual handling and hand arm vibration can be significantly reduced.

The main aesthetic differentiator is the tower form. As has been described in Section 1.27.2, the Mono-Tower combined with single box is believed to offer the best appearance, emphasising the unique feature of the crossing stays and sitting the most easily alongside the existing bridges with a single vertical element piercing a slim blade like deck.

The aesthetics of the diamond tower are not favourable.

Sustainability appraisal of the project was included at the earliest planning stages with the FRCS studies identifying a number of key indicators that related to supporting sustainable development and economic growth. The main focus on meeting these key indicators was the promotion of sustainable transport modes across the Firth of Forth. Sustainable transport remains a key element of the managed bridge strategy, with the existing Forth Road Bridge used for public transport.

As the sustainability appraisal process for the project has developed, 18 sustainability objectives have been set. The appraisal of the scheme against these objectives is a high level study, including the network connections to the north and south of the new crossing and the existing bridge and will be reported separately by the Sustainability Team.

At a more detailed level, comparing between the different options for the new D2M bridge on sustainability grounds is likely to focus on the environmental impacts and depletion of natural resources associated with the various construction methods and materials. The design work carried out to date has considered the use of materials and ease of construction activities. One of the most challenging aspects of a comparative sustainability appraisal will be to compare steel and concrete in terms of future availability of resources and impact on climate change. Consideration will be given to life cycle comparisons including materials recyclability as well as energy costs and emissions.

For each functional cross section type, the concrete box girder is estimated to be more economical than either of the composite options (box or plate girder). However, as noted in Section 1.30(c), it could be possible to design the approach bridges with box girder decks, allowing an open choice between concrete and composite materials for the tendering contractors. This could bring economy in terms of increased competitiveness and also allows for fluctuations in commodity prices which could occur during the design and tender process. 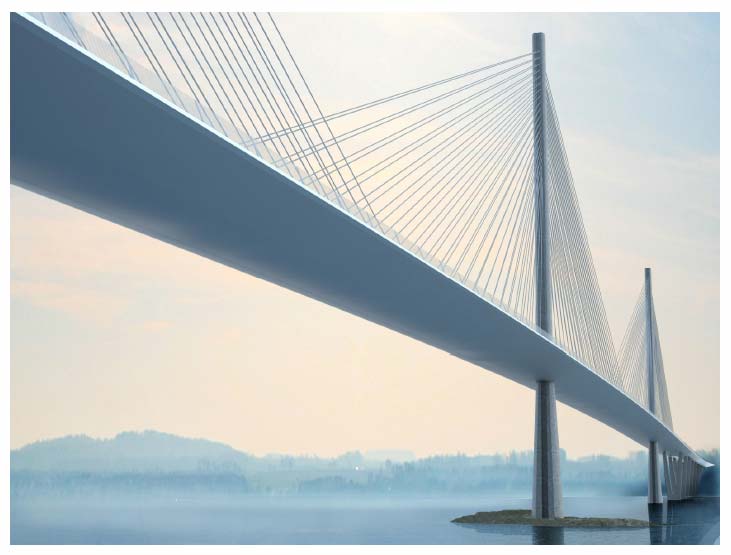 A D2M Options Selection Workshop was held on October 27th 2008 where the findings of the Scheme Assessment as documented in this report were presented and discussed.

The Mono-Tower with a single box girder deck is recommended as the preferred option because it represents an economical and low risk solution which is easy to operate and maintain and provides the most favourable aesthetics, providing a simple and elegant solution, emphasising the unique crossing stay feature of the bridge and without dominating the existing historic bridges at the site.

It is further recommended that both orthotropic and composite box girder solutions be developed with a view to giving the tendering contractors the choice of which solution to offer.

Although the single box girder deck is recommended as the preferred solution, the vented ladder beam deck will be further investigated as an alternative solution with a view to carrying out more detailed cost estimation to confirm the results of the Scheme Assessment cost estimates. If design optimisation could lead to cost savings as well as mitigation of some of the negative construction, operation and maintenance aspects of this deck type then it could prove to be a more favourable option.

The Mono-Tower was presented to Architecture and Design Scotland on the 3rd November as the recommended D2M scheme and was favourably received.

The following scheme options are recommended for further development: