‘Landslides’ is a generic term used to describe a range of types of gravitational mass movement. Many systems have been proposed for the classification of landslides,6 7.

In order to adopt the correct approaches it is essential at the outset to analyse and understand the nature of the landslides which have occurred in Scotland.

Using the Varnes6 system, landslides can be categorised into five main types - falls, topples, slides, flows and spreads. A sixth type – complex failure – is one in which one type of movement is followed by one or more of the other types.

The recently observed landslides in Scotland have been typical of flow-type landslides. The initial trigger can be the slippage of a relatively small amount of material. This may lead to the erosion of material on the open hillside below or, as is often the case, the material may enter an existing watercourse, leading to extra debris being added to an already rapid and potentially erosive flow of water. The fast-moving eroded material has sufficient energy to be damaging to any object in its path and will eventually be deposited lower down the hillside.

Debris flows are neither a recent phenomenon nor one which is limited to Scotland. They occur mainly as a result of the character of the hillside, the deposits (rocks and soils) which are present and the intensity and duration of rainfall. Debris flows are, generally speaking, not caused by the existence of infrastructure, and the fact that they impinge upon it is a matter of locality.

The landslide events of August 2004 which prompted the Scottish Road Network Landslides Study included debris flows on the A83 in the Cairndow area, the A9 to the north of Dunkeld and the A85 at Glen Ogle.

While there were no major injuries, at Glen Ogle 57 people had to be airlifted to safety when 20 vehicles became trapped between the two main debris flows. The real impacts of the events were economic and social, in particular the effects of the severance of access to relatively remote communities. The routes affected were closed for between one and four days affecting thousands of journeys and causing disruption to local road users, commercial vehicles and tourist traffic in the process. 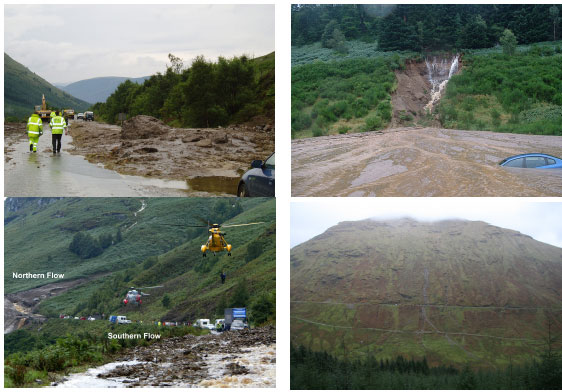 A number of other landslide events, including debris flows, have occurred in Scotland in the intervening years, some affecting the main trunk road network and others affecting minor roads. The most serious of these recent events occurred on the eastern approach to the Rest and be Thankful in October 2007.

The particular geology and geomorphology of the Highlands combined with high rainfall makes this area particularly susceptible to landslides of many varieties. Landslides affecting the road network occur regularly in the region.

While most of these are usually small-scale events and relatively quick to clear, some more significant landslides have affected the main road network in recent times. Many of the roads affected are however B-class, C-class or unclassified routes and these are often the only access routes to and from communities. The lack of available diversion routes makes landslides in such parts of Scotland particularly disruptive.

Debris flows mainly occur in Scotland in the periods July to August and November to January, with the latter period occasionally extending to October and February. There is, of course, no guarantee that such a pattern will continue, particularly with climate change studies anticipating that rainfall levels will increase in the winter but decrease during the summer and suggesting that the frequency of intense rain storms may increase.