A Geographic Information System (GIS) is a means of capturing, storing, analysing and managing information about geographical locations. It is made up of layers of information including data relating to, for example, the contours of the land, buildings, roads and other landscape features. The information is recorded within a map-space defined by two horizontal coordinates and, where elevation is an issue, a third vertical coordinate.

Various forms of data relating to the susceptibility to debris flow triggering were reviewed and, if appropriate, selected for use in the model to assess for debris flow hazards.

Rainfall data were not included within the assessment, since rainfall sufficient to trigger debris flow in susceptible areas could occur anywhere within the study area.

A large number of factors can trigger debris flows, but the five main ones are:

Information on these five factors was collected, scores assigned and weighted, and combined to produce a working model of debris flow hazard. The model was then validated by comparing its findings against the real occurrences of debris flows which have occurred in Scotland.

a) Availability of Debris Material
For debris flows to occur there must be material available and capable of being easily mobilised by water. Simplistically, granular materials are more likely to be involved in debris flows. Areas where the land contours could lead to the accumulation of such material were identified.

b) Water Conditions
There are two key considerations in respect of water and its impact on debris flows. The first is whether the ground, as described above, could be penetrated by either rainfall or overland water (as accounted for in item (a) above). The second is whether the underlying ground is sufficiently impermeable so as to ensure that excess water is retained in the surface deposits thus reduce their strength sufficiently to make debris flow more likely.

c) Land Use - Vegetation and Land Cover
Vegetation can help to stabilise slopes by reducing the amount of rainfall which penetrates the ground, soaking up moisture within the soil and reinforcing the ground through its root system. Loose, bare soil, on the other hand, is less stable and may provide a source of material for debris flow. Land cover information was thus used within the assessment with the lowest scores being given to woodland (representing higher stability), for example.

d) Stream Channels
Stream channels are often associated with debris flows as they can help to focus the direction of water during heavy rainfall and supply large volumes of water that can mobilise available material. They may also collect debris from more moderate flows, forming dams of material in and around the stream which may then be mobilised as larger and potentially more destructive flows at a later date. Stream channels and the slopes to either side were therefore considered as potential debris flow trigger areas.

e) Slope Angle
The angle of a slope has been found to be one of the most significant indicators of debris flow potential. In simple terms the steeper the angle of a slope the more likely it is that a debris flow will occur, albeit that beyond an upper limit of slope angle the availability of material will be limited.

Results of the Assessment

The five factors outlined above were scored and weighted within the GIS system. Combining the scores showed which areas had the greatest propensity for debris flows triggering. 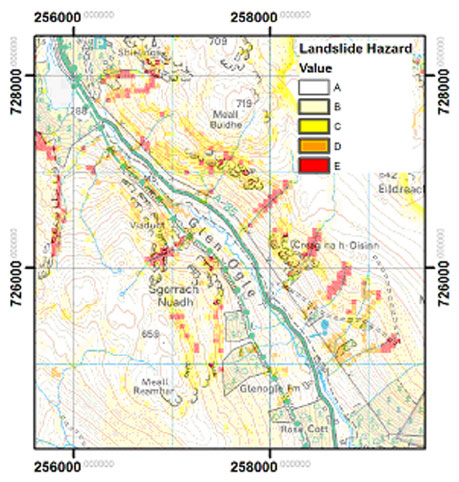 Thereafter the information was interpreted in order to define hazards to the trunk road network and the analysis undertaken to rank the hazards in terms of the exposure of road users to the hazard.