This element of the study comprises two activities:

The debris flow hazards identified in Section 4 essentially relate to Scotland as a whole. The hazards extant on the Scottish trunk road network were determined using the GIS imagery, Ordnance Survey 1:50,000 mapping and low resolution aerial photography to understand plausible flow paths between hazard areas and the network. This highlighted the debris flow hazard areas in relation to the road network and shows which have the potential to affect the trunk road network – the main objective of the study.

Additional imagery, maps and survey results were viewed alongside the GIS data created in Section 4 to enhance the understanding of the nature of the land in those areas and assess their proximity to the road network. Particular attention was paid to the land between the areas of potential debris flow triggering and the road in order to ascertain whether any debris flow might reach the road.

The Scottish trunk road network is made up of some 3,200km of road, ranging from motorways to single track roads. Of this just over 600km was thought to be potentially at risk from debris flows. These parts of the route were further categorised for severity of potential hazard and ranked as Priorities 1 to 4, where 1 is most severe and 4 is of lesser severity.

Two sections of the road network were highlighted for separate assessment – the A82 through Glen Coe and the A87 on Skye. These stretches of the network, totalling 46km in length, display particular characteristics which require a different type of assessment and were felt to require more specialist study. However, these sections continue to be included in the routes with higher hazard, in order to give a true reflection of their status, as summarised in the table below.

Outcomes from the interpretation of the GIS-based imagery.

The table above shows the breakdown of the road network by Priority. These priorities were used to set the sequence of the subsequent site inspections. These inspections were carried out in 2007 on the Priority 1 and 2 sites for which good quality aerial photography was available. The outputs form these inspections supplemented and validated the findings of the desk-based study.

The inspection process for each site began with the survey team studying high quality aerial photography and maps to allow them to familiarise themselves with the site and to highlight features which would be looked at in more detail during the site inspections itself.

Site inspections were conducted initially by driving the route which had been highlighted as a priority, observing and noting features and taking photographs to record the findings. Detailed site inspections in the form of walkover surveys up and down the slopes were then carried out at all locations to record more detail about the make-up of the hillsides adjacent to the roads. Any new features or recent unrecorded changes to the landscape, such as deforestation, were observed and incorporated into the assessment.

Each site was rated to take account of four main features:

These scores were combined with the existing data to produce a finalised the hazard score for the particular stretch of road.

The assessments of the Priority 1 and 2 sites that took place in 2007 are intended to be part of an ongoing programme of site inspections that will be carried out over the coming years.

As a final stage of the process, the data which had been collated and verified during the study was fed into a formula which would calculate the overall risk of debris flows to the road network and road users.

This formula factors in the hazards and the elements at risk, considering, for example, the level of traffic known to use certain stretches of road which effectively represents the risk to road users. Socio-economic factors are also incorporated, such as the length and viability of diversions in the event of the road being closed.

The map and table below show the sections of road which have the highest hazard rankings. A total of 67 sites are detailed, representing just over 380km of the trunk road network.

It is suggested that the GIS-based assessment and the associated interpretation should be refreshed approximately every 10 years to take advantage of any improvements in technology or data which will enhance the findings. It is also suggested that sites of higher hazard ranking should be subject to reassessment to take account of any changes on the ground.

Clearly debris flows are not the only hazards that may affect roads in Scotland and amongst the others are those presented by rock falls. Between 1994 and 1999 Transport Scotland (in a previous guise) initiated and operated a structured programme of rock slope risk assessment and management on the trunk road network.

A 2004 review recommended further action in this respect and Transport Scotland is currently assessing the future actions required to address those Hazard Rating surveys and re-inspections that remain to be carried out. 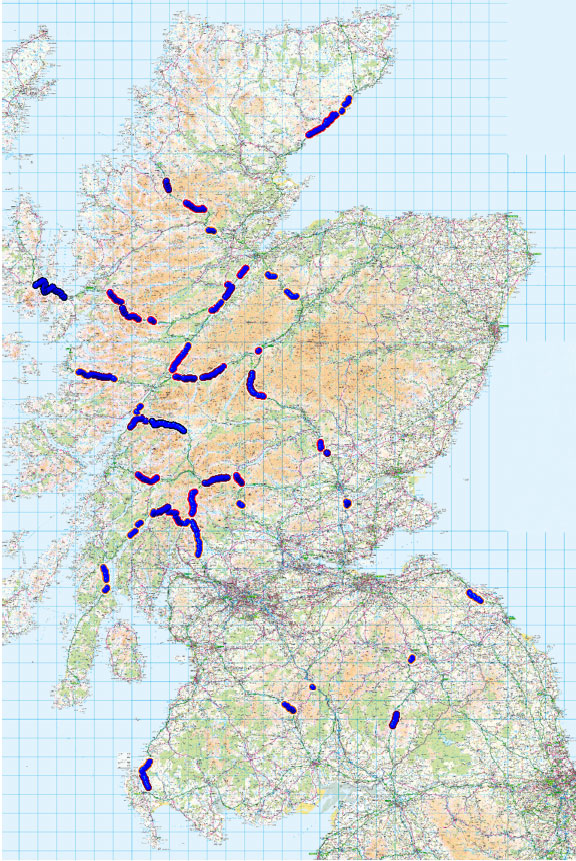 Sites with a hazard ranking score of 100 or greater