The purpose of determining a hazard ranking for stretches of the road network is to enable prioritisation of decision-making in terms of managing risks due to debris flow. At locations where the risk is deemed to require action, either the exposure of road users to the hazard or the hazard itself must be reduced.

Exposure reduction has to be the main mechanism for reducing the risk due to debris flow. Physical intervention through engineering can reduce the hazard due to debris flow. But, such solutions are more intrusive and of higher cost – consequently it is anticipated that relatively few locations would justify this kind of expenditure.

The basic principle of exposure reduction is a straightforward three-stage process:

In the current situation it is considered that the Detection-Notification-Action (DNA) approach outlined above should be used on a reactive basis when debris flow events occur. There may be a case in the future for reacting to extremely heavy rain, but further work is required to better develop rainfall thresholds.

Introduction of a detection system which would flag up the likely occurrence of debris flows would be a longer term solution. It would require a significantly enhanced rainfall detection system across Scotland and even once this were in place some time would have to pass to allow adequate data to be collected and analysed to come up with a warning system of sufficient reliability. Such a system is discussed in the following Section 7.

The movement of slope material can be monitored in real time using a variety of instruments. Some problems associated with these techniques include identifying the optimal position for sensors and the possibility that some types of sensors could be triggered by livestock and hill walkers. Closed circuit television is another option to observe hill slope movements, although the use of patrol vehicles is likely to be a more practical, lower cost solution allowing greater coverage of the at-risk areas. It is worth noting, however, that these methods are only likely to be effective at spotting impending debris flows in daylight hours and in conditions of good visibility.

Importantly, the valuable role of the public in observing landslides and alerting the authorities using mobile communications technology should not be overlooked.

In the immediate aftermath of the occurrence of a debris flow event, notification must reach the Police, the Operating Company and the infrastructure owner. The decision must then be made rapidly as to appropriate actions (see below).

A number of options for action are available including closing the road and putting in place appropriate pre-planned diversion routes. It is important that road closures cover not just the stretch of road which has been affected but also any neighbouring stretches which may be affected by subsequent debris flows.

Road closures could be effected by installing barriers, similar to snow barriers, which are already in place on some of Scotland’s roads. It is important that any such barriers are installed in locations where drivers can safely stop and turn back.

Warning the public of hazards is an important feature of any action programme. This includes, but is not limited to, traffic information websites showing real-time information, variable message signs and media announcements on TV, radio and web. It is suggested that press releases are prepared in advance for stretches of road which have a history of being affected by landslides.

Where variable message signs are used, it is important that they are suitably located, i.e. at a main junction well ahead of the affected stretch of road, to allow drivers to make an early decision whether to proceed or take a different route.

RISK OF WATER
ON ROAD AHEAD
PREPARE TO STOP

Following a closure, the road should only be reopened after a thorough inspection, undertaken once the bad weather has abated and the certainty that the hazard has passed.

Debris flows are generally triggered by heavy rainfall and forecasting and collection of rainfall data in real-time is therefore extremely valuable. A predictive system for Scotland based on monitoring rainfall is currently under development (see Section 7 herein). In parts of the world where landslide prediction systems are in place, landslide warnings are triggered once an agreed number of landslides is predicted to occur. The actions which follow are broadly the same as those which are put in place to respond to an actual debris flow.

There are, of course, some disadvantages to this system. The public may become desensitised to warnings if there are a large number of false alarms. Also, road closures have quite significant impacts and it may not be advisable to put closures in place in anticipation of a debris flow occurring.

Examples of Methods of Exposure Reduction

A review was undertaken of road signs used internationally to indicate the danger of landslides. Most countries use signs similar to those used in the UK, which depict rocks falling down a slope.

It is recommended that this graphic continues to be used on road signs in Scotland, with the possible addition of a plate underneath the triangular warning sign reading ‘Landslides’ and with the distance over which the landslide hazard exists (in miles or yards).

Signs which provide more detail about the nature of landslides and how they are generated could play a valuable role in helping to educate the public. Examples already exist of signs of this nature being successfully used in other parts of the world.

Such signs could be featured at National Park Gateways, service areas and the messages contained therein communicated in other forms.

A draft information leaflet explaining how landslides occur and what action the public should take is being drafted for the Transport Scotland website and other forms of dissemination. 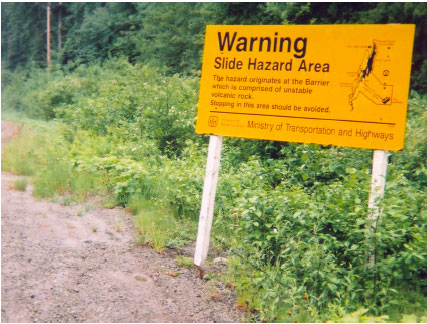 A number of techniques for hazard reduction are available, ranging from relatively straightforward drain clearing to more extensive engineering works. The challenge is to identify which locations will benefit sufficiently from such techniques to justify the substantial expenditure and potential impact on the environment.

Road protection may take on a number of forms including the following:

Such approaches must take into account the speed, load and consequent energy of a debris flow and ensure that the engineering solution put in place can cope with this effectively. 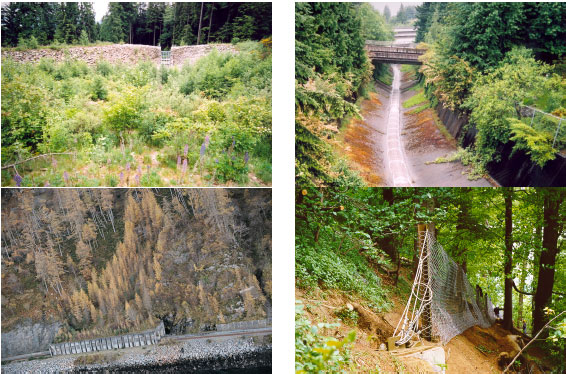 The realignment of roads is usually undertaken to improve road safety and increase journey reliability. However, in locations where the debris flow hazard is deemed to be very high, road realignment may be a viable option provided that such actions fit with broader strategic route objectives.

There are issues surrounding the maintenance of drainage and culverts in terms of debris flow management. In such localities culverts must be able to cope with debris as well as with water.

First, routine inspection and clearing of drainage channels and culverts form part of the responsibilities of the Operating Companies and are seen as a priority on the trunk road network and its surroundings. The issue of more distant stream requires a degree of cooperation with land owners immediately adjacent to high hazard ranking areas of the trunk road network, in order that mutually beneficial improvements to the drainage regime may be undertaken.

Second, major systemic improvements to the drainage at road level, including enlarged/enhanced culverts and other drainage features to accommodate debris should be considered. Increasing such the capacity of drainage systems fits well with recent changes to UK National Standards implemented in response to anticipated climate change.

The presence of forestry has been shown to help minimise debris flow in terms of both occurrence and magnitude. However, deforestation and logging can have an adverse effect on the drainage of a slope and destabilise the ground. Clear-felling is not as widespread in Scotland as it once was, and deforestation now tends to leave areas of trees intact, mainly for aesthetic reasons, but it is suggested that current practice be studied further to ensure that hillside stability, as well as visual appearance, is factored into future decisions concerning deforestation.