The plans for HS2 are well underway, with Phase 1 to Birmingham currently under construction and expected to be completed in 2026, Phase 2a to Crewe by 2027 and Phase 2b, completing the extension from Birmingham to Manchester and Leeds, expected in 2033.

On 21 March 2016, Keith Brown, the Cabinet Secretary for Infrastructure Investment and Cities made a joint commitment with Robert Goodwill, the UK Minister for Transport, that:

The UK and Scottish Government made a joint commitment on 21 March 2016 that the Department for Transport, Transport Scotland and Network Rail would work together to identify options that could be implemented between 2019 and 2029 that could improve journey times, capacity, resilience and reliability on the rail routes between England and Scotland. This includes moving further towards the joint target of a 3 hour journey time between London and both Glasgow and Edinburgh and much improved connectivity with the major towns and cities in between.

The report did not set out to reach a conclusion. It was commissioned to inform the UK and Scottish Governments of the options for providing improved journey times and rail capacity between the north of England and Scotland, including estimated costs and overall feasibility. Options identified include: upgrades within the footprint of the existing railway; new high speed bypasses of constrained track sections; and new continuous high speed lines on both an eastern and western alignment.

Completion of Feasibility Study by Transport Scotland on behalf of the Working Group, with three potential route options identified: two on the west coast and one on the east coast. 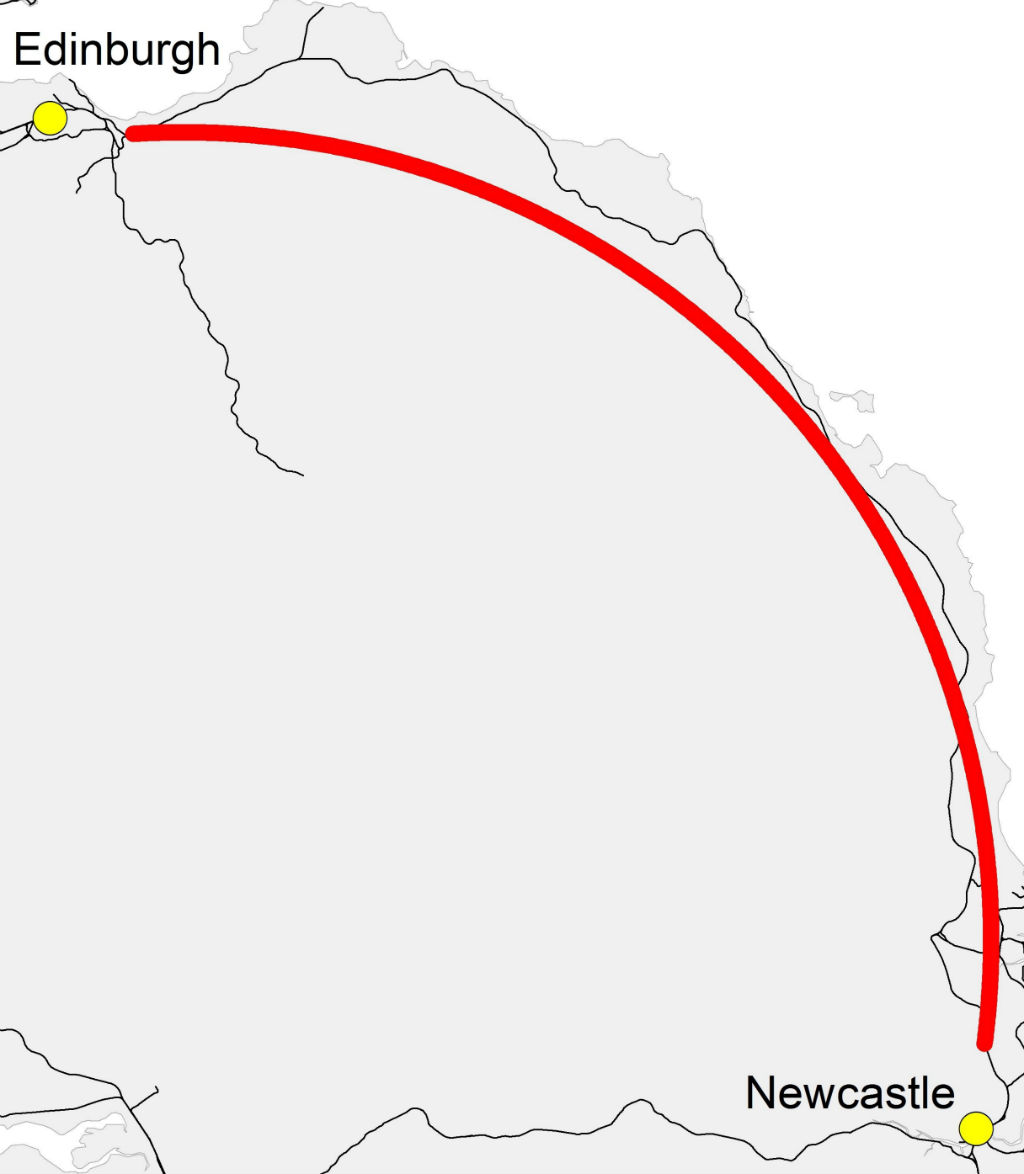 (Image above shows a vector representation - not the actual route)

On the east coast, the study confirmed that it was technically and environmentally feasible to construct an additional line between the outskirts of Edinburgh and Newcastle, which would release a large amount of capacity on the existing East Coast Main Line that could be used for additional passenger and freight services.

High speed trains running on the new line could also be capable of a sub 45 minute journey time between Edinburgh and Newcastle and a journey time of approximately 3 hours to London in combination with the new HS2 lines running between London, Manchester and Leeds.

(Image above shows a vector representation - not the actual route)

On the west coast, the study confirmed that it was technically and environmentally feasible to construct an additional line between Rutherglen and either Abington or Carstairs, or which would release a large amount of capacity on the existing West Coast Main Line that could be used for additional passenger and freight services. High speed trains running on the new line could also be capable of a sub 1 hour journey time between Glasgow and Carlisle and a journey time of under 3 hours 30 minutes to London. The study also confirmed that a high speed train operation over both the west and east coast options could be capable of a sub 1 hour 45 minute journey time between Glasgow and Newcastle. The route option via Carstairs, illustrated by the pink line, has intermediate connections with the existing rail network.

The study considered the potential for new a new cross-border station on the high speed line within the Eurocentral business park and on the existing rail network near Livingston to provide improved business and leisure connectivity between Scotland and England.

The output of this and other Feasibility Studies will be used to inform a Strategic Business Case which will be presented to UK and Scottish governments’ Ministers in due course for consideration in the light of their joint commitment made in March 2016.

These two reports were launched at an event held in Edinburgh Waverley railway station. Keith Brown MSP, then Cabinet Secretary for Infrastructure, Investment and Cities, and Robert Goodwill MP, UK Minister for Transport with responsibility for High Speed Rail, jointly announced that:

“…in this control period (up to 2019) the Department for Transport and Transport Scotland will take forward work with Network Rail to identify any and all options with strong business cases, for consideration for implementation in Control Periods 6 and 7 (2019 to 2029), that can improve journey times, capacity, resilience and reliability on routes between England and Scotland. This will include consideration of how these improvements can be future-proofed to allow further progress towards 3 hour journeys.”

Keith Brown also announced that this work would be informed by a public conversation with targeted stakeholders, which would commence in June 2016.

The High Speed Rail Scotland Summary Report allowed the conclusion to be drawn that it is clear that any high speed rail built between Edinburgh and Glasgow would be conditional on the nature of high speed rail coming from the south and would, in order to form part of any high speed rail network, need to align with the technical requirements of that infrastructure.

Nicola Sturgeon MSP, then Deputy First Minister and Cabinet Secretary for Investment, Infrastructure and Cities announced that Transport Scotland were assessing the case for bringing forward a high speed link between Edinburgh and Glasgow, in anticipation of a subsequent link to London. View the speech (PDF).

Announcement of a joint study of high speed options north of Manchester and Leeds to Scotland.

The combined efforts of Transport Scotland and the Working Group will be used to present all feasible options to both UK and Scottish ministers in order to make an informed choice for the potential implementation of high-speed rail in Scotland.

Transport Scotland is committed to providing value-for-money for public transport and along with the Working Group, are determined to challenge cost standards in line with global competition.The Working Group is engaging with industry and business leaders to gather views on the potential creation of additional jobs within the supply chain, engineering and maintenance of a proposed high speed rail route(s) in Scotland.

In Summer 2011, the then Minister for Transport and Veterans established the High Speed Rail Scotland Stakeholder Group (initially known as the Scottish Partnership Group) to develop and promote Scotland's case for inclusion in a UK-wide, high speed rail network.

The Group brings together representatives from Scotland's communities, businesses, councils and regional transport partnerships, who bring local knowledge and expertise that will be of significant benefit to the project. The Group ensures Scotland speaks with one voice in support of high speed rail.

The Group has an independent Chair and Transport Scotland provides secretariat support.