A9 Luncarty to Pass of Birnam

The A9 between Perth and Inverness is undergoing a major upgrade from single to dual carriageway. The Luncarty to Pass of Birnam section encompasses 9.5km of the A9 and will be widened as part of the dualling programme, improving journey times and safety on the route.

Our aim is to reduce journey times and make them more reliable. Alongside this, we aim to improve integration with public transport facilities, mitigate the environmental impact of the road and facilitate active travel such as walking and cycling.

Road users may experience some delays during the construction period as traffic management will be required to allow main construction works to be undertaken adjacent to live traffic. On completion the upgrade should have a positive effect on driver stress levels.

The existing 9.5km stretch of single carriageway will be widened to full dual carriageway standard, providing safe and guaranteed overtaking opportunities in both directions.

All junctions providing direct access to the A9 will be closed and replaced with two new junctions which will provide safe access to and from the road via slip-lanes. These are known as ‘grade separated’ junctions.

A number of new access roads and tracks will be constructed to provide properties with safe access to the local road network and the new grade separated junctions.

Four new overbridges are proposed to maintain local acess across the A9, along with the widening of one existing underbridge and the provision of a new side road bridge. Other structures, such as retaining walls and culverts will also be required.

The scheme also include:

Community engagement is a priority with all of our projects. Working with those affected by the A9 dualling programme is at the heart of our planning and we regularly run engagement events to consult local communities, road users, businesses and individuals as our plans are progressed.

Our contractor responsible for the design and construction of the A9 Dualling Programmebetween Luncarty and the Pass of Birnam, held a series of public exhibitions for residents of Bankfoot, Stanley and Luncarty on 3, 10 and 11 December 2018, respectively.

These events provided an opportunity to meet with key people involved in the project and to learn more about the construction phase in advance of the main works commencing in early 2019.

These events were supported by senior team members from our contractor: Balfour Beatty, Atkins and Jacobs as well as representatives from Transport Scotland.

Exhibitions were held in Bankfoot on 2 and 3 April 2014 to update the public on the Luncarty to Pass of Birnam dualling scheme.

Previously we hosted public exhibitions in January / February 2012 to give everybody the opportunity to see potential route options.

The exhibition boards are available in two parts:

How we plan traffic management

All traffic management for the project is planned in a manner that minimises the impact on the local community and minimises delays, disruptions and diversions to existing traffic. To help make sure that our contractor achieves this, traffic management proposals are planned and coordinated through a regular traffic management meeting, chaired by the contractor and attended by Transport Scotland and representatives of Bear Scotland, Perth and Kinross Council and Police Scotland.

Safety of road users and the workforce through the construction area is a key priority for Transport Scotland, so we work closely with our contractor, Balfour Beatty to ensure that their proposals reflect this, in addition to keeping disruption to a minimum.

As the project develops, updates on major temporary traffic management to allow construction of the project to progress, will be provided here. The dates given are as accurate as possible, but are subject to change at short notice.

Traffic management for duration of project

Major traffic management will be in place on the A9 between Luncarty and the Pass of Birnam in both directions to allow construction works to dual the carriageway to progress.

Traffic restrictions including narrow lanes and temporary safety cameras to enforce a reduced speed limit of 40mph through the works area will be implemented from Monday 4th February 2019.

The traffic management installation will take place overnight from 7:30pm to 6:30am, from Monday 4 February for approximately 2 weeks.

This traffic management will remain in place until completion of the project in Spring 2021.

The design of the scheme has been informed by detailed environmental assessments. One of the main considerations has been avoiding or reducing adverse effects on the environment.

The region between Luncarty and Pass of Birnam present a number of unique environmental sensitivities. These included:

The scheme passes through a rural area with some environmentally sensitive and protected areas, as well as running close to several communities.

The project includes the following mitigation for environmental impact:

Since the construction contract was awarded in September 2018, preparatory works including design, and construction works have progressed well during the initial months to June 2019. The project moved into the earthworks phase, where approximately 700,000m3 of earth is expected to be moved during summer 2019 season. That equates to approximately 280 Olympic sized swimming pools! The earthworks form the foundation of what will become the new widened A9.

The design of the dual carriageway has continued to progress, with more than 100 design packages delivered. Design packages are made up of many drawings and specifications which detail how each individual element of the project will be constructed.

To reach this crucial stage, our contractor consulted widely with a range of key stakeholders including Perth and Kinross Council, BEAR Scotland, Scottish Natural Heritage (SNH) and Scottish Environment Protection Agency (SEPA), to ensure that the needs of our stakeholders have been considered and included during design development.

Construction activity increased during the period and road users will have noticed a significant step-up in activity. This included: 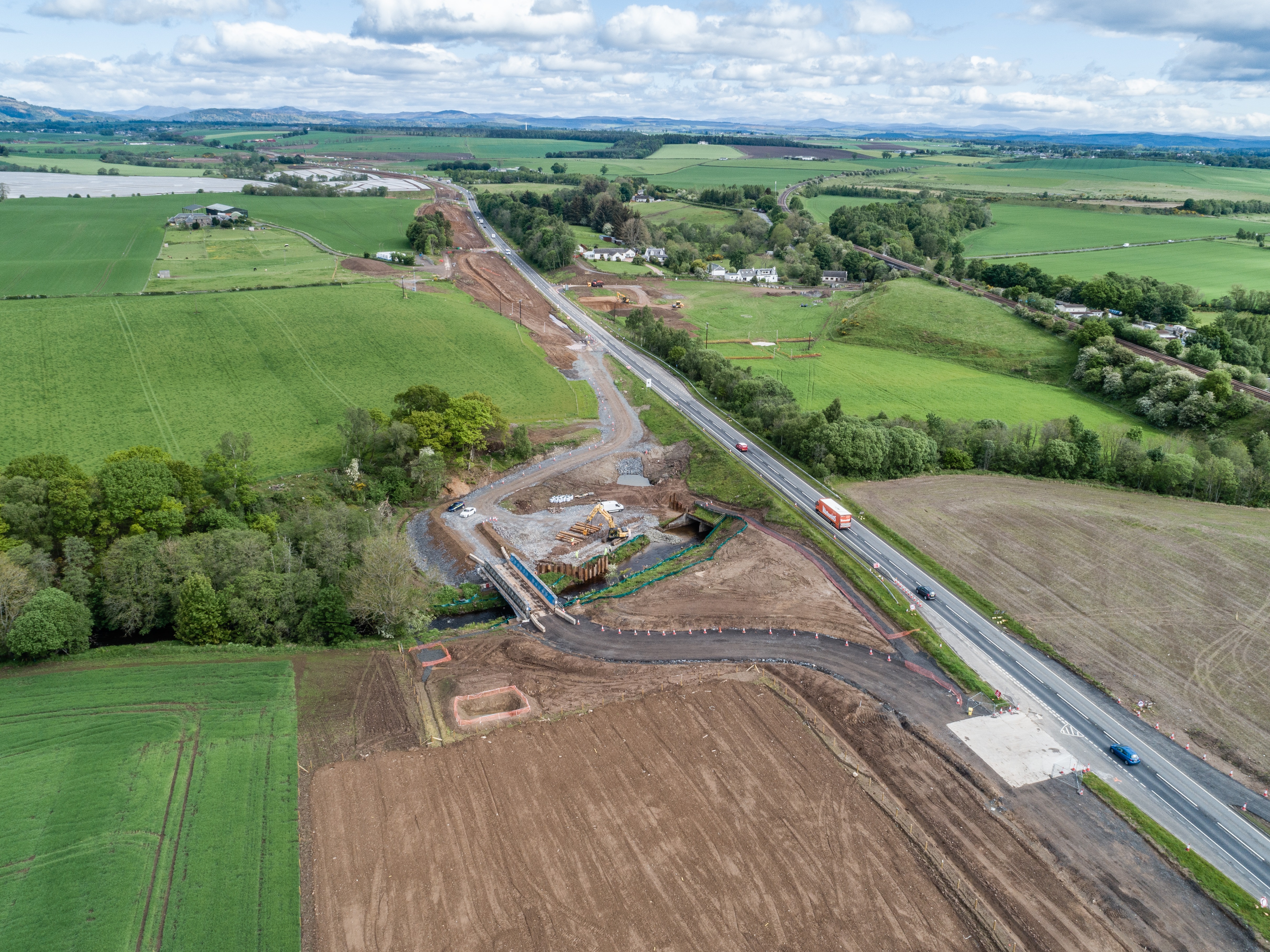 The earthworks stage of the project continued throughout Summer 2019 with the majority of earthworks to the south of the new Stanley/Tullybelton junction nearing completion.

North of the Stanley/Tullybelton junction, earthworks continued with the excavated material from Bankfoot being used as fill material for the construction of the Tullybelton East junction. The earthworks around this structure included the shaping of the approach embankments on either side of the junction which will form the new slip roads to tie into the existing Stanley road. In total, approximately 610,000 m3 of material had been excavated by the end of August 2019, enough to fill 244 Olympic size swimming pools. The temporary roundabout allows site vehicles direct access from the A9 to the quarry located at Loak Farm which provides the materials essential for the construction of the project and reduces the volume of construction vehicles on the local road network, which would otherwise need to come from quarries further afield.

Carriageway drainage on the southern end of the project commenced in July which involved laying pipes along the length of the new carriageway. Drainage is a key part of any road network as it allows surface water to run off the new carriageway to designated collection basins, ensuring the safe operation of the road for road users.

Works continued at Shochie and Ordie Burns to extend these culverts to allow for the wider A9 dual carriageway.

The project reached a significant milestone at the end of July following three overnight closures of the A9 to allow the installation of bridge beams to construct the new Stanley/Tullybelton junction. A total of 15 beams weighing 765 tonnes - the equivalent of 60 double decker buses – were installed to form the new structure over the carriageway. During the month of August, work began on the construction of the deck of this structure. 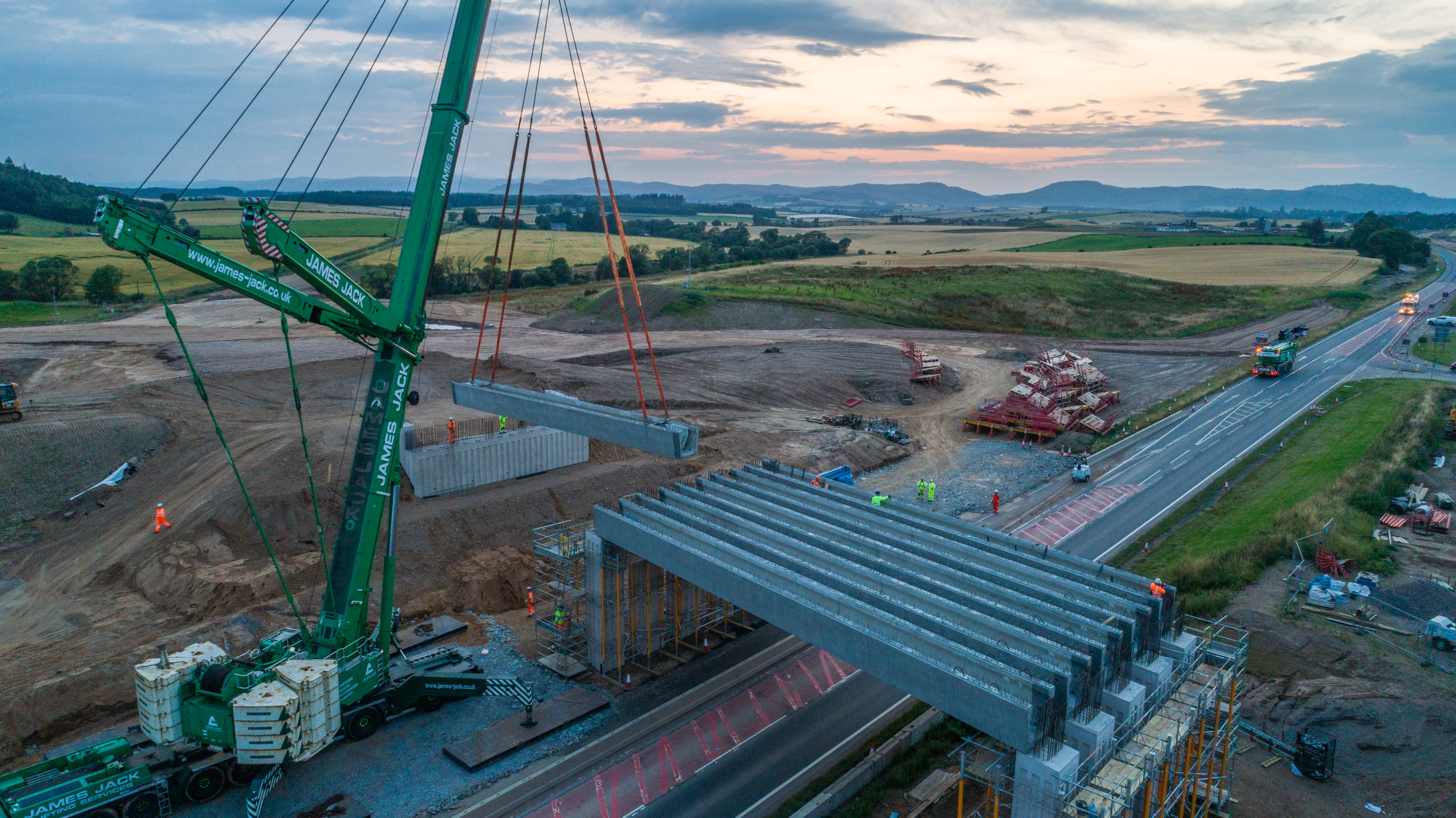 Construction of the concrete columns at Pitlandie, Coltrannie and Gelly overbridges progressed during August.

The steep embankment at Broompark was cut to make way for the new dual carriageway. Soil nails were used to stabilise the steepened slope. Soil nailing involves drilling holes into the slope and fixing long steel bars into the holes with grout. 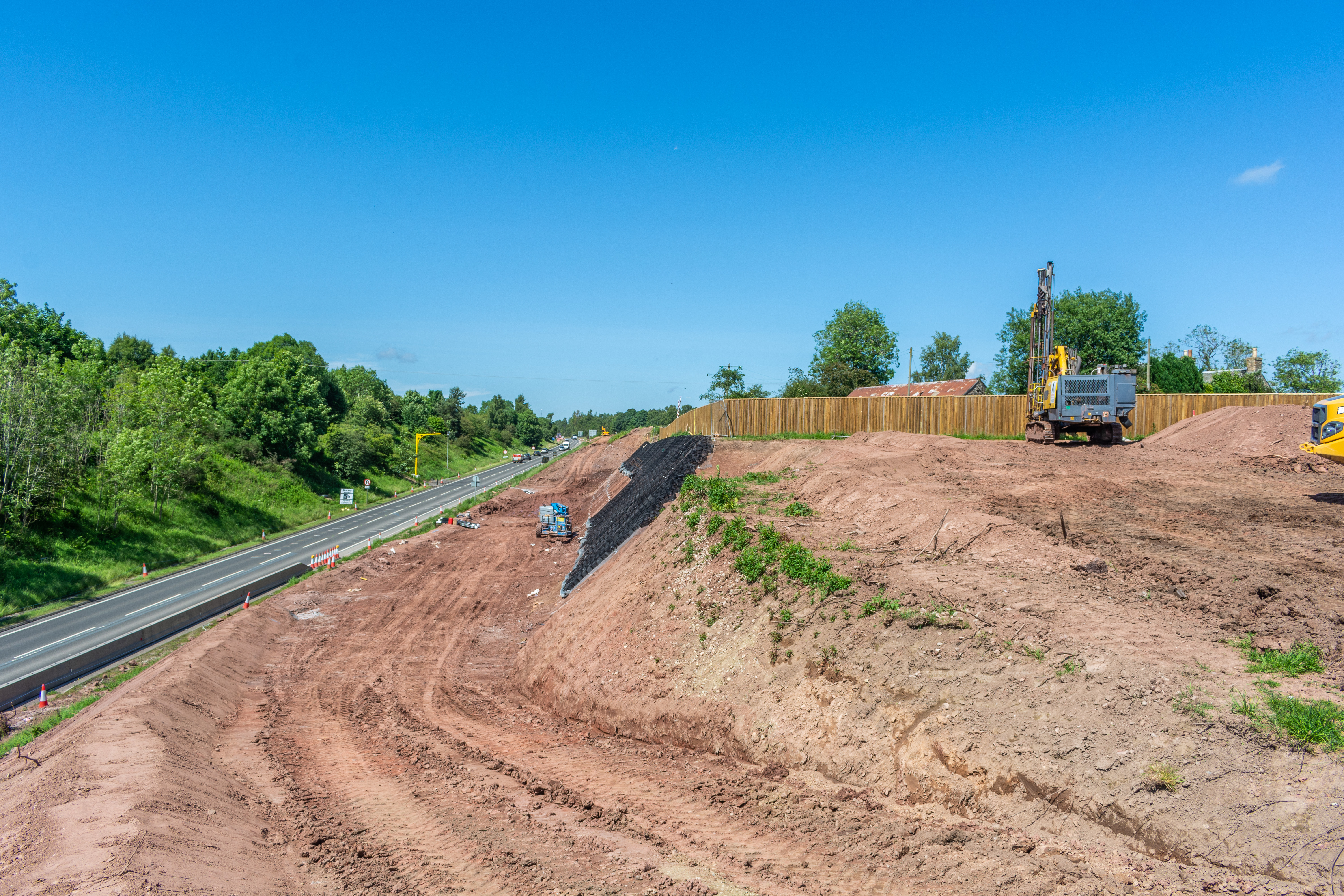 Further north of Bankfoot, site clearance and boundary fencing works continued, with earthworks commencing in the area to prepare for the construction of the two new overbridges at Coltrannie and Gelly.

The traffic management to the south of Luncarty junction was altered at the end of August to allow the first 2.4km of new carriageway to be constructed and tied into the existing dual carriageway. In advance of the new carriageway being constructed, drainage and foundation layers for the road were completed in preparation for the Cement Bound Granular Material (CBGM) being laid on this stretch.

The CBGM material is produced at the onsite batching plant adjacent to the project office at Loak Farm, along with some of the raw materials for the concrete and road pavement.

During Autumn 2019, the project moved into another exciting phase with the first layers of the new road being laid at the southern section of the site, between the Luncarty and Stanley junctions. Road users can now see the new northbound carriageway as they travel north of Luncarty. Once the southern section of the pavement operations are complete, surfacing operations will move to the north of the project to commence forming the new southbound carriageway working south towards Bankfoot.

Culvert extensions and head walls have now been completed including two large culverts at the Shochie and Ordie burns. The drainage adjacent to the carriageway was also progressed ahead of the new road construction which includes connections below the existing road. These connections allow the surface water run-off to flow to the SuDS (Sustainable Drainage Systems) ponds. In addition to the drainage, kerbing for the new carriageway has also commenced and road users will see this in place at the new carriageway north of Luncarty and also at the north end of the site, ahead of the new road being laid.

Earthworks for the project this period focused on embankment construction at the new Stanley/Tullybelton junction. The structures were also backfilled as the construction of the concrete supports and decks progressed. Good progress was made on two more structures, with the successful installation of precast concrete beams at both Pitlandie and Coltrannie overbridges during full overnight closures of the A9 at the end of November. These two important structures will provide new safer access for residents and farmers who live and work adjacent to the A9. These new accesses will also allow the existing accesses off the A9 to be closed to help improve road safety along this section of the A9. See a timelapse video of the beams being installed.

During the overnight closures works at drainage crossings and general maintenance of the traffic management were also undertaken along with refreshing temporary white lines at junctions throughout the site.