This section contains analysis and headline findings from the Scottish Household Survey questions on cycling and walking (including the Travel Diary part of the survey).

Distance cycled on all roads is estimated to have increased from 343 million vehicle kilometres in 2015 to 352 million vehicle kilometres in 2016. [DfT traffic estimates 2016] Traffic estimates indicate only the broad level of traffic, so year-on-year comparisons should be made with caution as they are estimated based on a small cross-section of Scottish roads.

One per cent of journeys had cycling as the main mode of transport, a similar proportion to 2015. [Table SUM1 & TD2] The average (mean) cycling journey was 7.6 km in length, using road network distance. [Table TD25a]

Figure 2: Percentage of adults cycling at least once per week by age, 2016 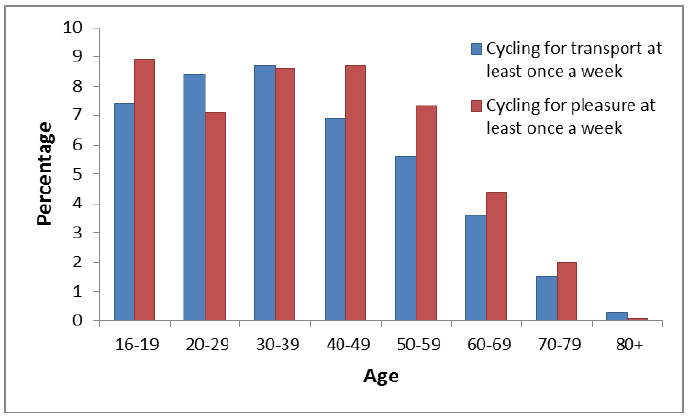 The median walking journey was just under one kilometre in length. [Table TD5a]

Figure 3: Percentage walking at least once per week by age, 2016 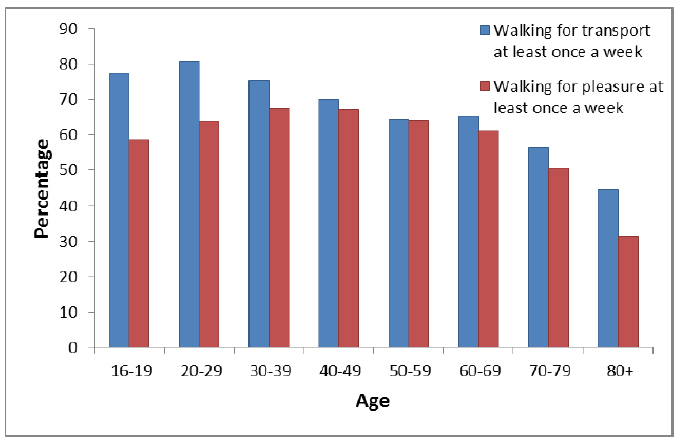 When respondents were asked what discourages them from walking more, the main reasons given, other than nothing (54%) were weather (18%) and health (16%).  [Table 43]