The proportion of adults who travelled the previous day has fluctuated over time.

As in previous years, older people were less likely to have travelled the previous day than younger age groups. [Table TD1 and Figure 1]

Men were more slightly more likely to have travelled than women (74% vs 73%). The gap was greater in previous years. [Table TD1]

Figure 1: Percentage of adults travelling the previous day by age, 2019

How do people travel?

Although rail travel makes up only a small proportion of total journeys, the percentage of journeys that are made by rail has increased since 2012. Walking and bus journeys have decreased over the same time period. [Table SUM1 and Figure 3].

Individual journeys can be broken down into different stages, where, for example, the traveller switches to a different mode of transport.

Under three per cent of journeys reported in the Travel Diary in 2017 were multi-stage. [Table TD2c]

Multi-stage journeys were most common where the journey involved ferry or air travel. [Table TD2c]

Why do people travel?

There has been little change in the proportion of journeys made for each purpose since 2012.

How do people travel to work?

Figure 5: Percentage usually travelling to work as a driver or passenger of a car or van, 1999-2019

Who travels to work by which mode?

Figure 7: Percentage of people taking the three most common methods of travel to work by household income, 2019

People in rural areas were also more likely to drive than those in urban areas. Younger adults (aged under 30) were more likely to take the bus than older age groups. [Table 7]

White Scottish and White other British people were more likely to drive than other ethnic groups and less likely to take the bus. [Table 7]

Figure 8: Percentage of employed or self-employed adults who are working from home, 1999-2019

Why do people choose these modes?

Relatively few people have changed the mode of transport they used to get to work in the past year. Of all the modes, driving showed least change. Based on data for the last 5 years, of those who drove to work a year ago, 98 per cent still drove to work [Table 10]

The main reasons given by respondents for changing their usual mode of travel to work in 2018 were changing job (38%) and moving house (21%). [Table 10a]

How do children travel? 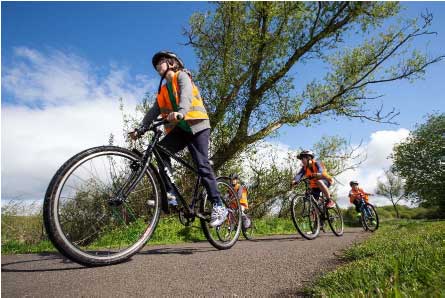 Around half of children (52%) walked to school, nineteen per cent travelled by bus and around a quarter (25%) travelled by car. [Table SUM1]

The Sustrans Hands Up Scotland publication also covers travel to school. Due to the use of different categories, it is not possible to make a direct comparison with the Scottish Household Survey.

Why do parents choose these modes?

Of those walking, eighty nine per cent did so because the school is close by. Of those travelling by car, most parents used this because it was the most convenient mode (36%). Parents also chose to use the car to take their children to school because it was the quickest method (20%) the safest method (18%) or, too far to walk (16%). [Table 16]

When do people travel?

Slightly more journeys were reported on weekdays than at weekends. Sixteen per cent of journeys were on Fridays, the most popular day to travel, whereas only 12% were on Sundays. [Table TD8]

There has been little change in these travel patterns reported in the survey over recent years.

Figure 10: Percentage of journeys made by duration of journey, 2019

Twelve per cent of car driver journey stages were perceived to be delayed due to congestion in 2019. This is very close to the average figure since 2003, and compares with thirteen percent in 2018. [Table TD10 and Sum1]

The main reason suggested for car or van stage delays was ‘volume of traffic’ (79%). [Table TD10a]

Over the combined three year period from 2017 to 2019, the travel diary’s reported congestion figures were highest for commuting (22%) and business travel (17%) stages. Weekday journey stages were more frequently affected by congestion than weekend stages.  As might be expected, the morning and evening peak periods on weekdays saw the highest proportion of driver journey stages delayed by congestion. [Table TD12]

Questions in the social survey, which focused only on commuting congestion, found that over the combined five year period from 2014-18, 34% of all journeys to work were perceived to be affected by congestion at least once a week. This figure was higher for both car/van drivers (44%) and bus passengers (45%). [Table 8]

Where do people travel?

When looking at travel between areas of Scotland, fourteen council groupings are used. Some councils are merged to preserve sufficiently large sample sizes.

In the combined period from 2015 to 2019, most journeys in Scotland started and finished in the same local authority grouping. The proportion was highest in the Highlands and Islands and the Grampian group (Aberdeen City, Aberdeenshire and Moray), where this was the case for 97% of all journeys. The proportion of journeys starting and finishing in the same area was lowest in South Lanarkshire (71%) and Glasgow (72%). [Table TD13 and TD14]

How far do people travel?

Walking journeys had the shortest average (median) length (1.0 km), with cycling next lowest at 2.7 km. The median car/van driver journey was 6.8 km, bus journeys averaged 6.2 km and rail journeys had the longest median length at 20.8 km. [Table TD5a and Figure 12]

Sixty eight per cent of journeys under 1 km were made on foot; car journeys (whether as a driver or passenger) accounted for most of the remainder (24%). Car was the most common mode of travel for all distance groupings greater than 2 km. [Table TD2a]

Influence of ordering services on travel

Where individuals had used ordering services to have goods delivered the previous day, they reported a reduction in the number of trips they made that day in forty-eight per cent of cases. [Table TD17]

The most popular ordering service was internet shopping, which was used the previous day by 7% of the population, followed by takeaway food delivery (3%). Thirty to thirty to forty nine years olds were the most frequent users of internet shopping (9%). Takeaway food delivery was most popular with twenty to twenty nine year olds (5%). People aged over 70 used ordering services least. [Table TD17]